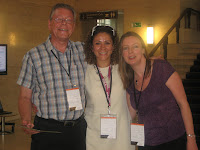 The following comments were received after SCOLA presented at the London JISC e-Factor event on Tuesday 28th June 2011.

“I didn’t get the chance to see the SCOLA videos on Tuesday, but have been watching them this morning and totally agree with Martin’s comments. Nothing so effective as the learner saying why they are learning , what it means to them and where they want to go next. Great advert for SCOLA and for the work of the adult and community sector.” – JISC Information Officer

“Thank you very much for presenting at our event.
I would like to disseminate these videos more widely, if that is alright with you.
In all my time in Adult Education, thirty years, we have always had to persuade funders and governments of the value of Adult Education. It seems to me you can give them charts and graphs but nothing is as powerful as hearing learners talk about how their course hastransformed their lives.
Your films do just that. So I will see how we can get more people to see these films.
Keep up the excellent work.” – JISC Senior Adviser