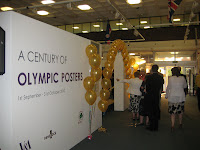 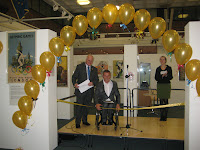 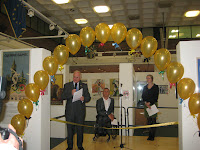 A heaving Europa Gallery hosted the launch of “A Century of Olympic Posters” – an excellent platform for the exhibition and the programme of events that accompanied it. The exhibition is on from 1 September to 31 October 2010.

This touring exhibition enables new audiences to see the Victoria & Albert Museum’s collection in a new context. An official from the V & A said: “A Century of Olympic Posters” first opened in Beijing in January 2008 in the run up to the Beijing Olympic Games. Since then it has been travelling in China and Britain and it will be going on to Mumbai and Melbourne among other destinations. Lord Tope CBE said that they were delighted that more people will have the opportunity to see the exhibition in Sutton and it is great to have the exhibition on display in London- the 2012 olympic city.

The exhibition was opened by David Weir MBE, Paralympic Gold Medallist and Freeman of the London Borough of Sutton and includes a special exhibition from Lloyds TSB of works of art in tribute to him.

After the opening ceremony I enjoyed walking around the inspiring posters. They provided windows into the cultural concerns and international politics of their time- some of them gave a shiver of history as you walked past. What I enjoyed about the exhibition was the number of different stories it told. In one respect it was the story of the Games themselves. Tracing the development of Olympic posters is also a chance to take a look at one hundred years of poster design – revealing the evolution of graphic styles, approaches and printing technologies.

A facinating exhibition that is well worth a visit. Hope you can make the time to see it.