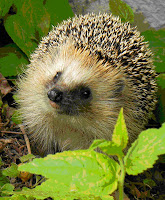 Horace’s nose twitched. He smelt the scent of
Autumn, the falling leaves and the snitch of cold
in the air. A ray of sunshine had hit the hedge
under which he had been hiding and stirred the
last vestiges of warmth in his bed of leaves. He
stretched carefully and realised that he could not
hide forever. One day soon he would have to go
back to SCOLA. It was a part of his destiny. Despite
his great embarrassment.

The clock repair class had been fine. It had been Olympian in its compass and the company of those who attended and who had been so generous to a small hedgehog. No, it was the Pilates class that had been his undoing. He still glowed redly with the memory of it.

The start had been fine. There was a gentle warm-up where he stretched and squirmed with great satisfaction. He reached for the sky. He dug down into the ground and twisted to his left and his right. He had even successfully navigated the use of big rubber bands to give a little more effort to the stretch. It was when he started to work with the big blue ball that he had encountered problems.

He was sort of ok when he was asked to lie on his front. That gave a good stretch to the base of his spine though he did keep rolling off and having to catch himself before he hit the ground. There had even been one moment when he had been well balanced and able, just for an experiment, to take all four feet off the ground. He had felt as if he was flying, or swimming without water!

No, his downfall came when he was asked to reverse the process and to lie on his back on the big blue ball. It was inviting trouble. He had raised an eyebrow to the instructor to sort of say, “Are you sure?” But they had seemed full of confidence … and .. who was he to question it? But … well, as you can imagine, big rubber Pilates balls and a hedgehog’s spines are not the best combination.

Briefly, things had seemed ok. And then he began to feel that sinking feeling as the spikes penetrated the ball. For a moment, while he stayed perfectly still, he had the illusion that all might be well. All it took was the smallest of movements, a minor re-adjustment, and he began to hear the hiss of air escaping beneath him. He saw the ground coming towards him. He knew it was an illusion and that he was heading towards the ground.

As he sank he thought he heard someone mutter something about, “Hedgehogs!” He did not know if it was a disparaging remark or even if there was a hedgehog or animal equivalent of racism or sexism. But he felt it keenly. Here he was trying to live a life like any other. It wasn’t his fault. The tutor had ok’d it. But he was being blamed just because he was a hedgehog!

The blue ball finally sank to the ground. He tried to roll over to get up. But he was still sort of attached to the ball and it held him firmly in place. The ignominy! He had to wait until someone saw his plight, came over and helped him up. He had to stand quivering on all fours as they pulled the flattened ball off his spikes. He was embarrassed. He felt belittled. He felt that people were pointing and laughing. Whether they were or not, this was how he felt.

When the ball was off, he fled. That evening at home he reviewed his day. He tried to talk about it with his friend Robin but found that he could not. It was too soon, too fresh and too painful. Perhaps in time … …

He recognised that he might have over-reacted. But he was a sensitive being and didn’t like people making comments. How could he possibly go back and have them pointing him out to one another. No, he would just lay low for a while until perhaps they had forgotten. So, was today the day when he should face up to it?