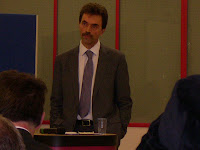 Tom Brake, Lib Dem MP for Carshalton and Wallington visited SCOLA on Thursday evening, 18th November. He had set himself the task of addressing the public on the impact of the Comprehensive Spending Review. He did this very ably demonstrating a sound grasp of all the issues on which he spoke.
Topics addressed included university fees and the related question of promises made on the campaign trail and how they relate to the reality of being in a coalition government. He spoke on tax, the magnitude of the debt and the debate about how fast it should be paid off; benefits including housing benefit, the education of young people and graduates, Europe and the EU; how far the experiences of Greece and Ireland impinged on decisions made; localism and the ‘Big Society’; civil liberties, libraries and legal aid. As you can imagine, the meeting ran slightly over the 1½ hours scheduled, but not so much as to leave anyone unduly concerned.
The well publicised meeting attracted about 50 people. Saboohi put two questions on behalf of SCOLA. A good percentage of people attending the meeting spoke and there was no sense of it being dominated by one or two people with an axe to grind. It is questionable if anyone changed their minds as a result of the meeting, but we were certainly all better informed.

Thanks go to Jan Koene for chairing the meeting and ensuring the smooth running of the session. Thanks also to SCOLA caretakers for setting up the arena and guiding participants as they arrived.

SCOLA endeavours to fulfil its duty as a platform for the community to engage in local and national issues that matter to them and we will be hosting future events where politicians and councillors will be invited to respond to the concerns of the community.

Wish you had been there!